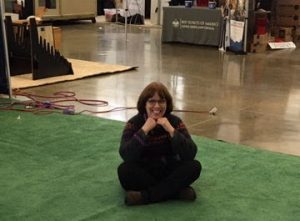 Life certainly is full of surprises, isn’t it?

The Friday before last, we were told the Pittsburgh Home and Garden Show would be shutting down two days ahead of schedule.  Just a couple days earlier, there were no plans to close early, but no one anticipated how quickly things would change as the COVID-19 virus spread and social distancing became our new reality.

As we now are taking care to limit our time outside our homes, going out only for necessities, it’s more important than ever to use other ways to connect with each other.

With no shows or events coming up, my weekly blog is even more valuable to me now as a way to keep our connection going.  Since I don’t have so many new and exciting shows, travels, or adventures to report on these days, I thought you might enjoy hearing some of the stories behind my paintings.

I’m going to start with one that has been one of my most popular paintings, year after year… 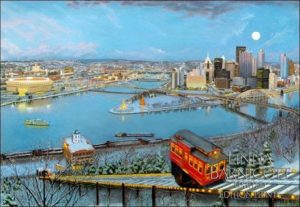 At the beginning of my career as a young Pittsburgh Artist, I never would have dreamed it would last so long or be so fruitful. “My Hometown” was going to be my final painting in the “Pittsburgh Remembered” series and was considered my masterwork at the time.  It was my biggest painting ever, and it took six months to paint.

I wanted to squeeze in as many Pittsburgh landmarks as I could… including the red Duquesne Incline, Three Rivers Stadium, the Point, the Majestic riverboat, as well as the sunset and the moon to light the way.  I’ll admit I took a few liberties, tweaking, nipping and tucking as I sketched so I could bring the bridges and the cityscape a little bit closer to the viewer.

Looking back on the process of setting up the painting, one of my fondest memories was Tom driving me up to the observation deck at the Duquesne Incline to do a photo shoot. There is a high black iron fence around the deck, and being of short stature, my only chance of getting the shots I wanted was to climb up onto the fence. I remember balancing precariously with my arms wrapped around the fence, while also trying to hold the camera in position, waiting for that perfect moment to capture the Incline as it passed by.  And then… it started to rain. You’d think now that I was a real Pittsburgher I would have been prepared, right? Lucky for me, a nice gentleman who couldn’t help but notice my problem came over with his umbrella and held it over my head long enough for me to take all the photos I needed.

“My Hometown” would be the final painting in the series, so of course, I wanted to make sure to include Tom somewhere in there.  (As you know, sneaking my family into my paintings is one of my trademarks!)  You can find him as the guy wearing a hat, a silhouette in the side window of the Incline car, two windows back.

Talk to you all soon. Stay safe and healthy!