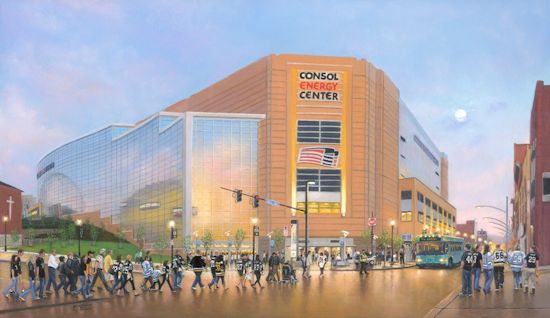 Can you believe it was just a few years ago (2011) that construction began on the new Consol Energy Center sports arena? And it was only just a few years earlier that I had painted the old Mellon/Civic Arena in “Hockey Fever at Mellon Arena.”

As they were tearing down the old arena in early 2011, it seemed that everyone wanted something to remember it by, and soon that print had sold out. My goal (ha ha, see what I did there?) in painting “Pittsburgh’s New Home for Hockey” was to build a bridge of memories from the old arena to the new. In fact, if you look closely you’ll notice that I even painted the beautiful reflection of Mellon Arena in the glass of the newly constructed Consol Energy Center.

I remember the day we scouted out the new Consol Center with a two-hour photo shoot for the new painting. We recruited friends and family to put on their own period hockey jerseys and assemble outside the new arena. I asked my models to walk around alone, with their families, and also mingling with other groups as I considered different layouts for the painting. This is how I figure out where I’ll put my people in the final composition. The idea is for them to lead the viewer’s eye around the painting to where I want the viewer to look. We had a lot of fun that day, and I’ll never forget it!

Now with this week’s announcement of the name change to PPG Paints Arena (which is going to take some getting used to!), “Pittsburgh’s New Home for Hockey” has suddenly become nostalgic! Do you think Pittsburghers will continue to refer to it as the Consol Center, just as most of us never quite made the transition from the Civic to the Mellon Arena? We are a stubborn tribe! 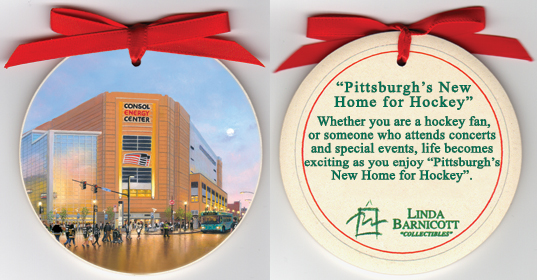 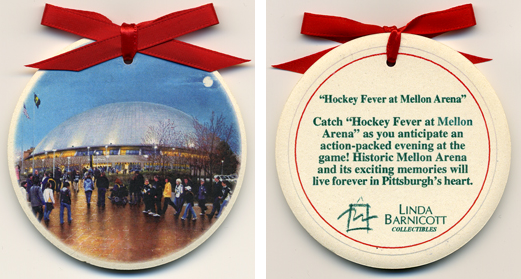 I’m back in the studio this week working on “Santa’s Joyride.” I hope your week is fun and productive as well!