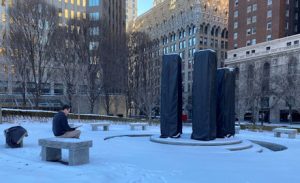 Though the past week’s weather has been anything but spring-like, I’ve been making great progress on my new painting, “Springtime in Mellon Green Park.”

A few days ago, I was at the stage of the painting where I had to decide whether to put someone in the composition, and if so, where was just the right spot?  And who could I possibly use as a model? Hmm… I know! “Hey Tom, would you mind going downtown to Mellon Green and posing for me on a bench?”

Normally, there wouldn’t be a problem with that… except that this week we had a snowstorm and a lot of ice. But Tom takes his modeling duties seriously, and on Sunday after church we drove downtown to set up the shot. When we got there, we realized that the despite the sunshine, none of the snow had melted. As we got out of the car, I told Tom, “You’d better take the scraper in case we need to scrape the snow and ice off the bench.”

The other issue was that the park was closed. However, we didn’t come all this way just to be thwarted by a few chains, so Tom (such a gentleman!) held out his hand and helped me climb over. And then when we got to the bench, Tom brushed off the snow to find that there was at least an inch of ice under it! No matter. I just smiled and said “Don’t worry, just take off your coat and sit when I tell you… and not before!”

There was one prop for the scene – I asked Tom to bring a book to pose with so it would look like he was enjoying a leisurely lunch hour in the park. Once he was ready to go, I dashed over to set up my camera shot. I often tell my customers that I may be a pretty good artist, but I’m a lousy photographer. Too bad I have no choice but to live with the photos I take!

As Tom posed not-too-comfortably on the ice-covered bench for a springtime painting, I thought about our granddaughter Autumn and how she would be laughing herself silly at the sight. 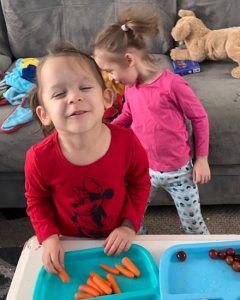