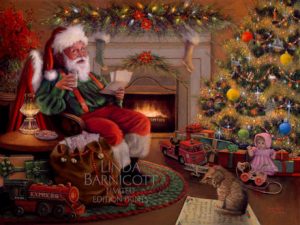 I have a title!!!! After much thought and collaboration with Tom and close friends, I settled on something short and sweet, but one that says it all – “Dear Santa.” Tom also proposed the subtitle “Letters from a Child’s Heart,” but we decided to keep it simple.

As I promised last week, I want to show you some of the things I’ve included in the painting that have a special meaning or symbolism for me.

As I was designing the painting, my first thoughts were that I wanted a living-room setting. Santa liked the idea of looking directly at the viewer while holding a glass of milk. (Personally, I think he just wanted to drink the milk and eat the cookies. Why not? He’s Santa!) I started out picturing him holding his leather-bound “Naughty and Nice” Book, but I changed my mind. I had been wanting to incorporate something related to artwork and letters from children, so I decided to exchange the Naughty and Nice Book for a bag full of letters written by children from around the world.

I loved the idea of including a kitten in the painting. At first I thought it would be fun to have the kitty climbing down from the top of the chair to read over Santa’s shoulder. Instead, I decided to highlight one of the letters Santa received from a little girl and to share it with you, so I put the kitty up front with the letter in plain sight. I named the kitty “Noel” because my favorite childhood decoration was a set of shiny ceramic letters that spelled out NOEL.

I also decided to paint a fire in the fireplace so there would be a soft glow of light reflecting off different elements in the room. It was easy to paint the mantel and the fireplace –  they’re still decorated from last Christmas!

As you know, I always make sure my family is represented in my paintings. My father’s Santa ornament is making its fifth appearance on the Christmas tree in the “Jolly Old Elf” series, and the pink doll in the painting once belonged to my mom.

Tom and I also visited his childhood home and climbed the stairs to the attic to bring home his old fire truck and aeroplane, as well as his father’s childhood train to include in the painting. If you look closely at the train, you may notice the characters 4-AAA under the window. This is a secret message – “For Aria, Abigail and Autumn” – dedicating the painting to my granddaughters. 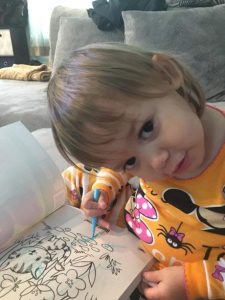 You may also notice that the letter was signed by Aria herself. It wasn’t easy to get her signature – after all, she just turned 2.  She really is just as sweet as that letter, if I may say so myself!

Finally, the doggie pull toy was donated by one of my readers. I love when my supporters get involved in my work, and it means the world to me.

As you can see, I put a lot of personal symbols into “Dear Santa,” and it’s a very meaningful painting for me. I hope you will enjoy it as well.

By the time you’re reading this, “Dear Santa” should be available on my website under Prints for Sale at  www.lindabarnicott.com

You can also see it in person this weekend at the Washington County Covered Bridge Festival. I will be there Saturday and Sunday. Just cross the Ebenezer Bridge and make a right. I will be along the walking path. I hope to see you there!