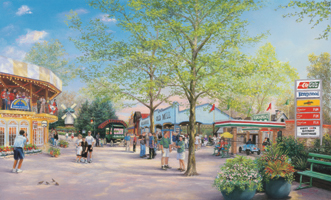 Kennywood Park is not just a local institution and historic landmark, but it’s also been one of my favorite subjects for my paintings over the last 20 years. With Opening Day just around the corner, I’d like to share with you the story of how I got started painting Kennywood.

Even at the beginning of my career, Kennywood held wonderful memories for me – it was the place where I had my first Pittsburgh date with a very special guy (Tom!) who would soon be my fiance. So I really, really wanted to paint it! Unfortunately, my publisher at that time was a North Hills/West View Park kind of guy, and he wasn’t interested in having me paint Kennywood.

However, I never gave up on the idea, and on the very day I parted from my old publisher, I walked into the new publisher’s gallery with a mission. I said “I have an idea for a series of paintings that I’ve wanted to do for years,” and he replied, “I also have an idea for a series!” I was taken aback, but I said, “OK. You go first, but I really feel strongly about this!”

As I looked at him with anticipation, he said, “I thought we could paint some Kennywood together!” I still get happy chills up and down my arms when I think of that moment! Folks, that’s when you know it is meant to be!

The next step was to convince Kennywood management to come on board with the idea. I remembered that Rick Sebak from WQED had helped me with some resources when I painted “Meet Me Under Kaufmann’s Clock, Too!” and he had just finished making a documentary at Kennywood called “Kennywood Memories.” He promptly returned my phone call, and I was flattered to hear that he was familiar with my work. He recommended that I call Mary Lou Rosemeyer, the PR director at Kennywood… and to tell her he said hi!

When I called Mary Lou, I introduced myself as a Pittsburgh artist and told her about our idea. She thought it was a wonderful project, and soon we got together and planned out the five paintings of the first series, beginning with “Ride With Me on the Carousel.”

The rest is history! Over the next 10 years, I painted many of the rides and buildings in the park, and Kennywood has always been very generous to me in return. Click Here to check out my Kennywood print collection and take a walk down Memory Lane.

“Ride With Me on the Carousel”