Hawaii is for the Birds 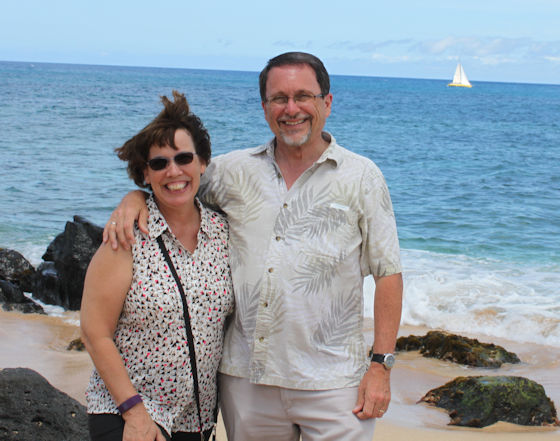 Aloha, it’s Linda! Tom and I are finally back in town after our Hawaiian adventure, relaxed and fully re-centered.

I have so many stories to share with you about our experiences in Hawaii… Last week I told you about the flowers falling down like rain and the beautiful scents throughout the Big Island. But in addition to the incredible natural beauty of the islands, what impressed us the most was the joy of the people there, their politeness and generosity. Though the people of Hawaii are very diverse, we never sensed any tension, but instead felt an overwhelming sense of family.

One thing we didn’t expect – Honolulu was like any other big city, with eight-lane highways going through Waikiki. We saw more people standing on one street corner than we saw in Kona in a whole day!

Parts of Honolulu are a little like Beverly Hills, with streets packed with super-upscale stores and security guards who looked like Secret Service agents watching their doors. Tom and I could only imagine the prices as we walked by. Yet at the same time, you might see someone in their bathing suit running down the sidewalk holding their surf board. And anytime you stopped and just listened, you could hear laughter floating in the air.

Some of my very favorite stories from Hawaii, however, involve birds! 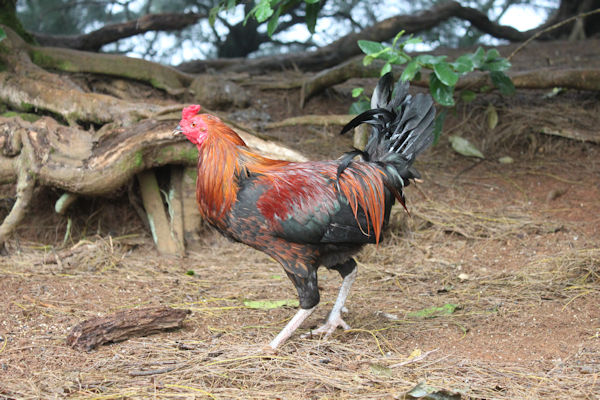 As Tom and I roamed around the Big Island and then Oahu, it seemed like there were chickens everywhere! Wild and free chickens who love being around people (I’m sure it had nothing to do with the food those people were eating!). I thought of all the rooster paintings you see everywhere and how it might be fun to paint one myself. The old joke, “Why did the chicken cross the road?” could have been written in Hawaii, as chickens crossing the road are an everyday occurrence there!

Then on the day we visited Pearl Harbor (a very emotional experience), I decided to get something to snack on since we had left without breakfast early that morning. Tom was taking in the exhibits when I texted him and told him I’d be outside by the exit, sitting on the wall. I bought some cashews and iced tea, ripped open the bag of nuts, and started to enjoy a few little nuggets of goodness. Suddenly, a pigeon jumped onto my arm! He cocked his head and looked at me as if to say “Well?”

I put my drink down to free up the hand he had landed on. I wasn’t sure if pigeons can eat cashews, so I hesitated, but he was not going to leave me alone. He pecked at the bag, so I gave in and fed him one. One gulp and it was gone! Then he looked at me again, like he was saying, “I know you’ve got more. Hand ‘em over!”

Then another bird landed on me. And then another! At one point there were at least nine birds on me, and a crowd had gathered (including Tom) to watch the show! 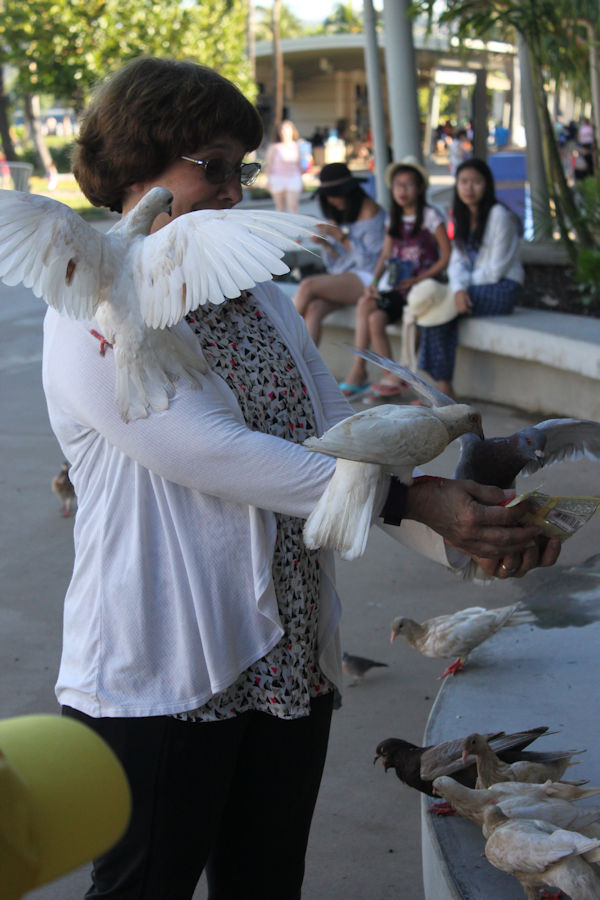 So here’s a picture of me that morning, losing my breakfast to the Animal Kingdom.

When I left for Hawaii, I have to admit I was feeling pretty down. But Hawaii’s magic did its work – I feel like my old self again, and I’m already preparing for a busy fall season.

I just heard that I’ll be getting a double-sized chalet this year at the Holiday Market in Market Square. I was on the waiting list, so I was holding my breath hoping that I would get one. I am thrilled about this since I’ll be able to show so many more art gift ideas and paintings.

Finally, my new website is nearly finished… so stay tuned for the unveiling! Have a great week.