From Deluge to Desert 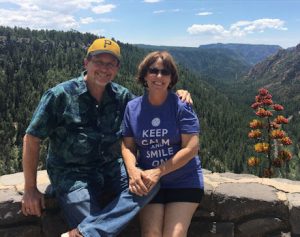 As we enjoy some downtime in the dry desert, it’s hard to believe that just a few days ago we were manning my booth through a very wet (and also hot!) weekend at the Westmoreland Arts & Heritage Festival. It rained through almost the entire show, but despite the weather, there was a great turnout, with so many precious moments shared with folks stopping by my tent.

One of the fun features of the Festival is the Town Crier, who strolls around the festival grounds with his bell, announcing all the different activities and events. On Friday afternoon, he appeared on the corner next to my tent, ringing his bell. I was busy, so I wasn’t paying much attention… until he proclaimed, “This year’s winner of the Westmoreland Art Award is… Linda Barnicott!” I nearly fainted! My prize was a fancy ribbon and – even better! – a free booth at next year’s show.

The next day, the Town Crier was “captured” by his fellow actors brandishing a huge pistol. As they led him away, he turned to call over his shoulder – “Linda, paint me a hero!” and then he was gone.  Britt looked at me and said “Wouldn’t it be fun if you did?” So that night after I put my booth to bed, I found a photo I had taken on my phone when I received the ribbon the day before.  I picked up my sketchbook and sketched until 1 a.m.  The next day, I worked on it between customers until it was finished.  At the bottom, I wrote “He was a hero.”

When the show was over, I tracked him down and asked him to come and see me. He couldn’t have been more surprised and thrilled with his portrait. I remember the director who runs the show telling me she couldn’t do it without him, so maybe he really is a hero! 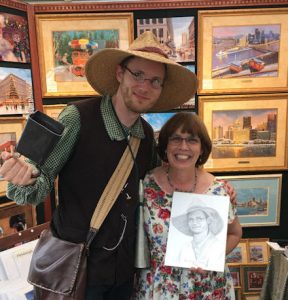 Sometimes it seems that no matter how far you go from home, you can always find a little bit of Pittsburgh… today as we were sightseeing in Flagstaff, Tom proudly sporting his new Pirates hat, we passed a parked car and heard someone call, “Go Buccos!”

So of course we had to stop and chat!  The fellow told us that he was a huge Pirates fan even though he’s never visited our city. We had a lot of fun telling stories about Tom’s job at PNC Park, especially the part where he uses a microphone on the sidewalks outside the park for crowd control. He loves to tell the crowds terrible jokes to keep them entertained while they wait. I mentioned that after 36 years in the ministry the last thing they should do is give him a microphone!

To our surprise, our new friend told us that he had been praying about whether to go into the ministry and that this was the third time this week a random conversation had turned in that direction. We wished him the best in his decision about answering God’s calling.  As we walked away, I told Tom, “If you hadn’t worn that hat, the man would have never had the chance to talk with us.”

Isn’t it funny how small choices we make day to day – perhaps to wear a certain hat or strike up a conversation with a stranger – can turn out to be life-changing for someone? 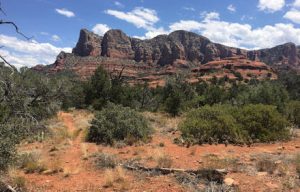 Though we’re really enjoying our time here in Arizona, I’m actually looking forward to returning home.  Then it will be full speed ahead – time to get ready for Picklesburgh and start my 2019 Santa paintings!